Here you'll find all the guidelines to create the perfect lyrics.
Check the Help Center for further information about our Guidelines.

2. No copy/paste
Copying lyrics from other websites or apps is not allowed – make sure that you only add lyrics that have been transcribed by yourself.

3. Transcribe all lyrical content
All repeated parts should be transcribed. Do not use multipliers.

Incorrect
(Sang by Cardi B) ***
Bardi (Cardi)
He said he wants to touch it, and tease it, and squeeze it
Well my piggy bank is hungry, my nigga, you need to feed it
If the text ain't freaky, I don't wanna read it
And just to let you know, this punani is undefeated

*** Here the bracketed line does not directly reflect anything said/sung within the song, and so is incorrect.
Correct
Bardi (Cardi) ***
He said he wants to touch it, and tease it, and squeeze it
Well my piggy bank is hungry, my nigga, you need to feed it
If the text ain't freaky, I don't wanna read it
And just to let you know, this punani is undefeated

*** Here, ‘Bardi (Cardi)’ is included, NOT because Cardi B is singing the section, but rather because she says her own name as an introduction to her verse.
4. Transcribe the lyrical audio content only
Transcribe filler parts when necessary.

Shape of You by Ed Sheeran

Certain guidelines differ between languages. Please make sure to always refer to the guidelines of the language in which you are formatting.
1. Format lyrics following the song structure
Break transcriptions up into individual lines

In And Out Of Love by Oh Wonder

One thing, I don't know why
It doesn't even matter how hard you try
Keep that in mind, I designed this rhyme to remind myself how
2. Make the format clear and homogeneous
Capitalize the first letter of every line and any proper nouns (e.g. a person, place, or thing)

It’s my life by Bon Jovi

Rabbit Heart by Florence and the Machine

It’s my life by Bon Jovi

A single hyphen or ellipsis can also be used in cases where a curse word has been removed in a censored version of a track.

Correct
Their sh- ain't regular rich, so they end up in a ditch
I'm not a regular b-, so when n- see me, they jump on my d- (uh)
He not a regular shooter, so when you see me, saluda
Ain't got a knife in my hand, but I'm choppin' it up with some n- from Cuba
Direct Speech

When direct speech occurs in a track, it should be given within speech marks (") following a comma. The first letter of the direct speech should be a capital one.
Do You Feel Like We Do by Peter Frampton

Examples
Tryna (Trying to)
‘Til (Until)
‘Cause (Because)
Finna (I’m fixing to)
I'ma (I am going to)
Turnt (Turn up)
Gon' (Going to)
Outta ('Out of')
E'ry (Every)
Nah mean (Know what I mean?)
Lil' (Unless a proper name)
Cuz (When referring to a cousin, or brother, friend, comrade, etc and NOT abbreviated "because")
Ya (Should be used when in place of “You”)
Yah (Should be used when in place of “Yeah/Yes”)

1. Synchronize each line in time with the music when the first letter of the line is sung (or less than half a second before)
Don’t start or finish the sync with the instrumental tag

Complete the sync (by syncing the “END” line) right after when the last sung line ends. 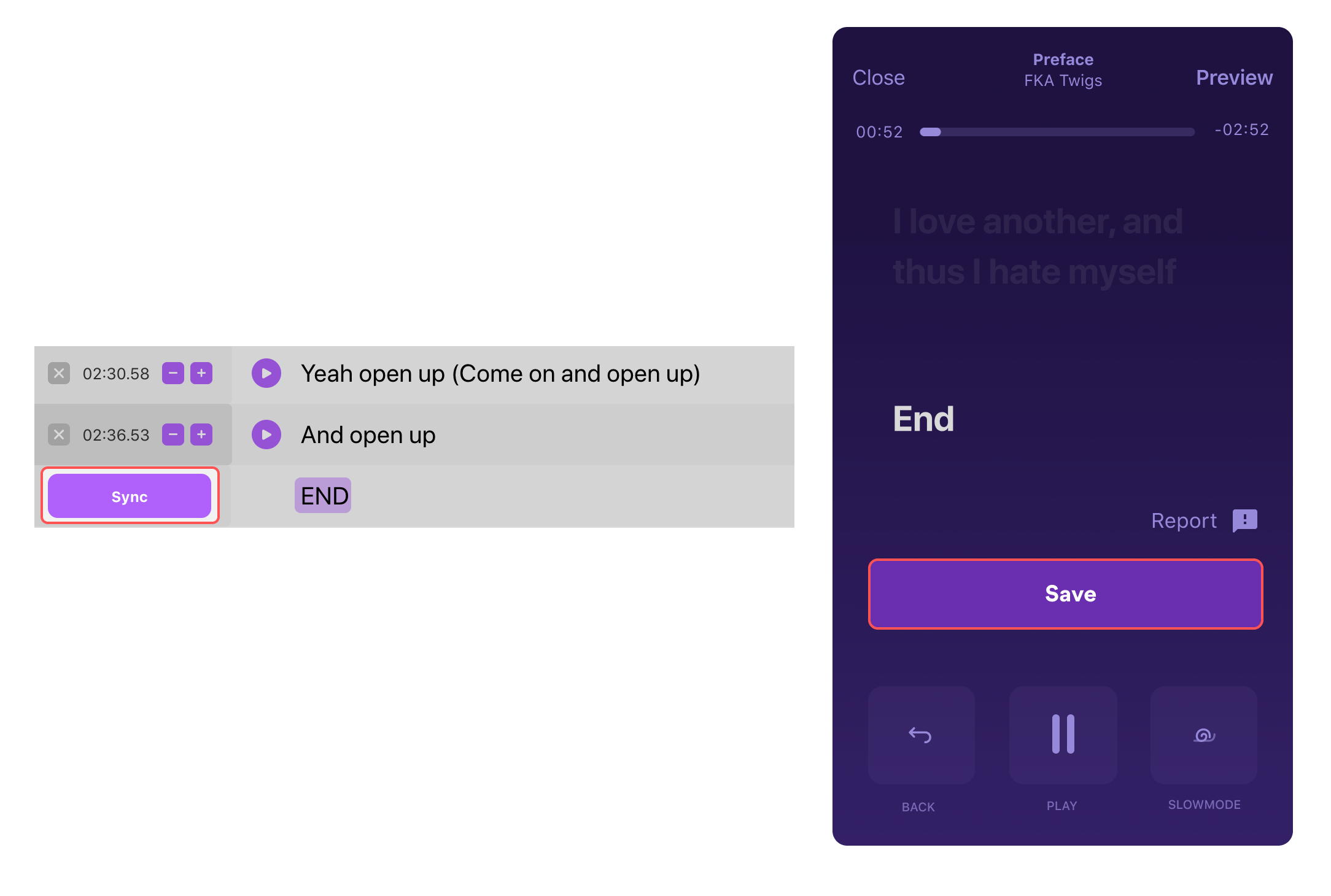 2. Never synchronize a line in delay
When you’ve made a mistake and your synchronization is out of time, correct it!

Desktop app: adjust the beginning of the line using the +/- buttons. If you find that the sync is completely wrong you can reset it by selecting the “More (...)” button. From here you can start to sync from scratch.

Mobile apps: click on the back button and correct the last synced line, continuing synchronization from there 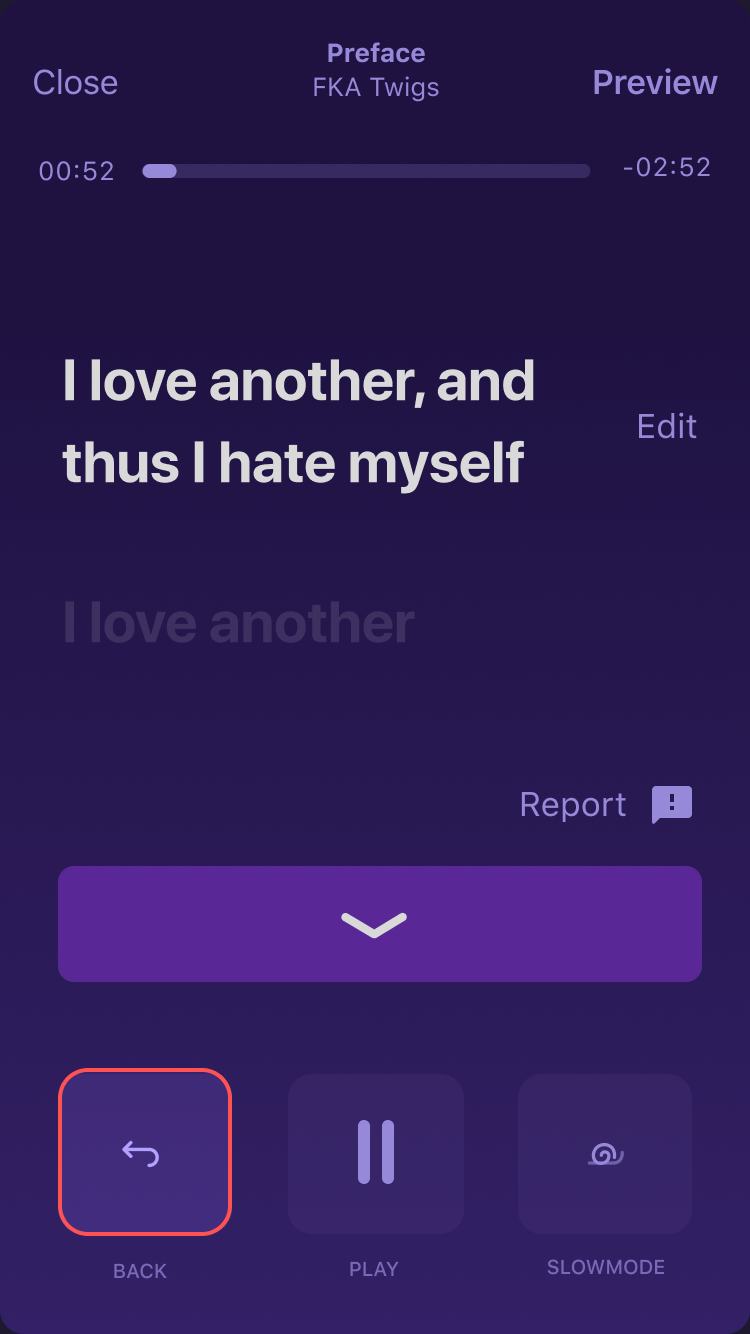 4. Set a line as instrumental when there are no lyrics (or singing) in a song for longer than 5 seconds
Click on "Set Instrumental" to mark the part as instrumental and sync this line as usual with the "Sync" button.

5. When a song contains multiple voices and choruses at the same time, sync the main vocals only
‍

1. Don’t copy/paste. Do not use machine translation websites and services
It is not permitted to copy translations from other websites or apps. Ensure you only add lyrics translated by yourself.

2. Translate line by line
Focus your translation on the related line only. Do not translate two or more lines into one single line.

Shape of You by Ed Sheeran

Fire on Fire by Sam Smith

Desktop App Only
What does “structure” mean?
In this context structure refers to the act of defining every part of a song. All songs are divided into sections, and every section has a name, function and specific meaning.
This new, additional step will allow for the recognition of all sang and spoken parts of all songs using this simple formula.

Which are these sections or parts?
Please note that not every song will have all of the above, but may contain only some. It’s important not to force anything in order to include them all. Kindly, make sure you tag what you think is right, the song will speak to you.

#INTRO
- This is located at the beginning and introduces the song.
‍
- The intro to a song doesn’t have the same melody as the verses and choruses. It may also introduce the performers, especially in rap songs.
‍
- The intro of the lyrics should include words and should not be confused with the instrumental intro.

- Unlike other sections such as the #VERSE and #CHORUS, the #INTRO is not a repeating section. Therefore, the #INTRO tag should be used only once per song.
#HOOK
Rah, rah-ah-ah-ah
Roma, roma-ma
Gaga, ooh-la-la
Want your bad romance

#HOOK
Rah, rah-ah-ah-ah
Roma, roma-ma
Gaga, ooh-la-la
Want your bad romance
‍
#HOOK
Very repetitive and catchy part of the song, usually its most memorable component, not to be mistaken with the chorus

- You can find it before the chorus, at the beginning of the song, before or after the bridge‍ 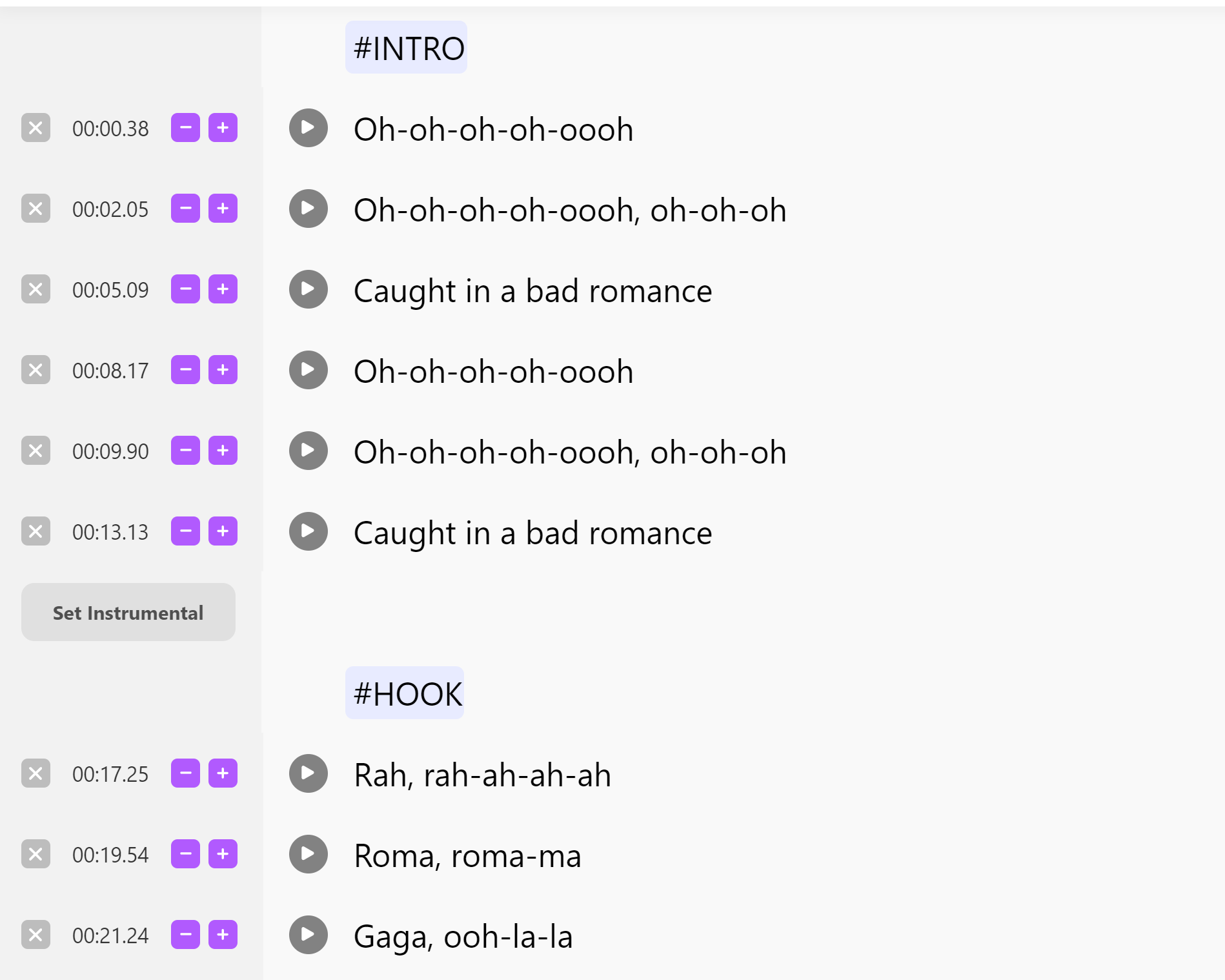 #VERSE
- The verse roughly corresponds to a poetic stanza and can often be structured according to rhyming schemes.

- When two or more sections of the song have almost identical music but different lyrics, each section is considered one verse.

- Generally, there are multiple verses in a song, and they usually have different lyrics even though the melody will likely be the same.‍ 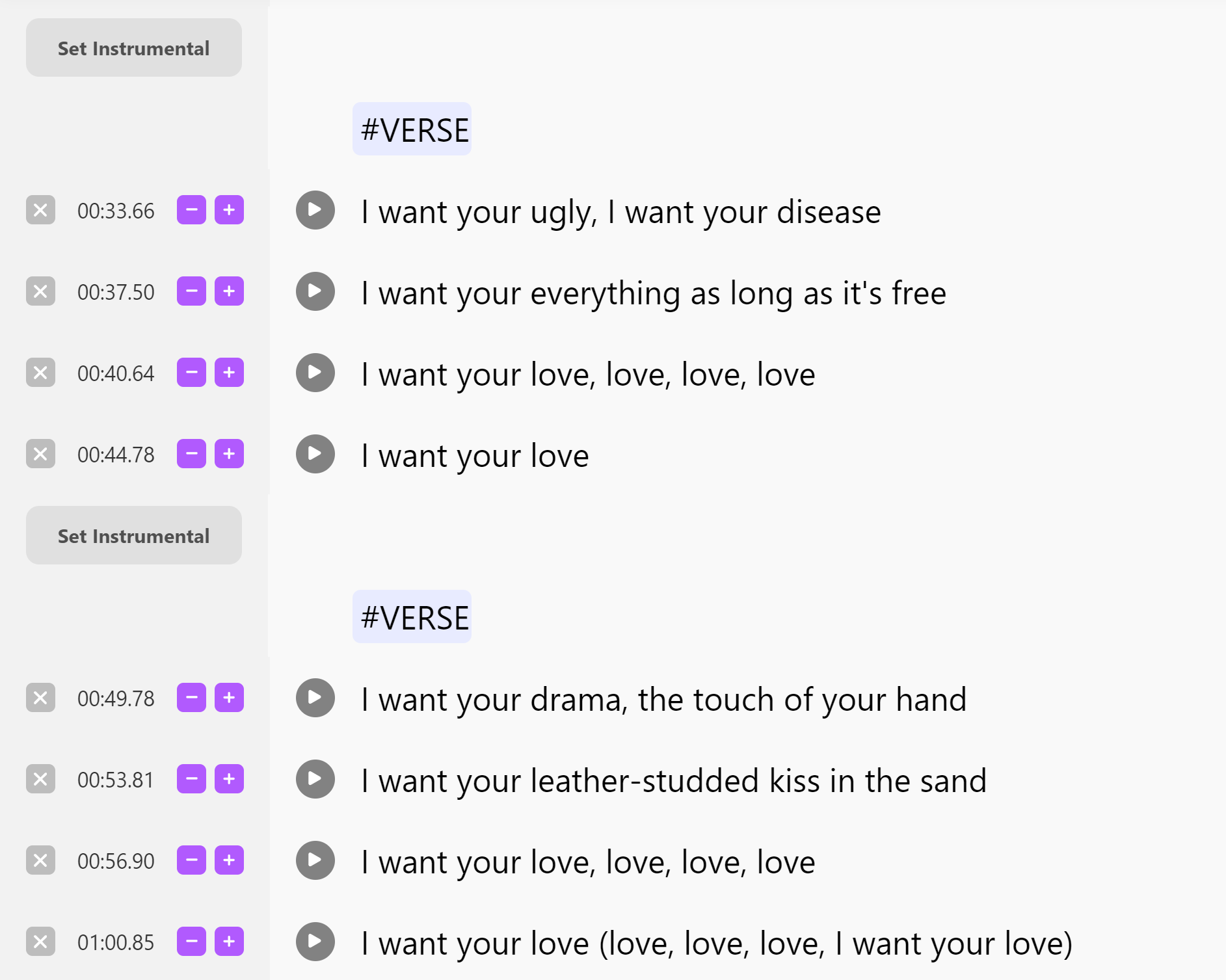 #PRE-CHORUS
‍You know that I want you
And you know that I need you ('cause I'm a free bitch, baby)
I want it bad, your bad romance

#PRE-CHORUS
- This is an optional section, sometimes included between the verse and the chorus

- The chorus contains the main theme of what is being expressed lyrically and musically. It is repeated throughout the song, and the melody and the lyrics rarely vary.

- In many cases, it contains the song title 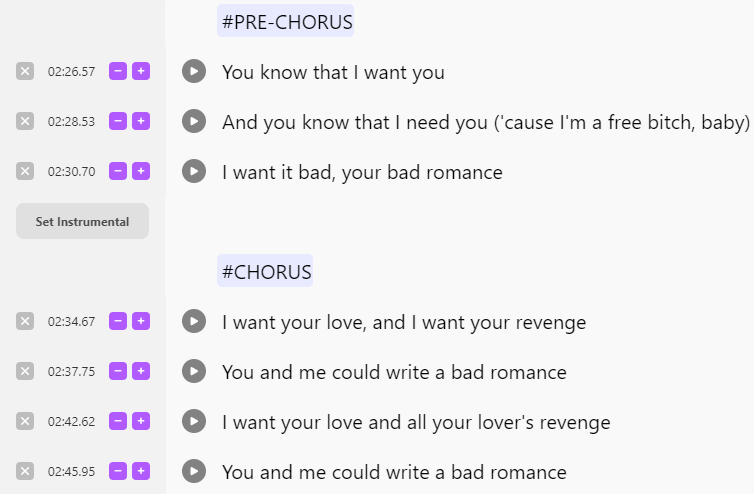 #BRIDGE
Departure or release from the rest of the song

- It is the connection between the last chorus and the previous one (which is usually the second, but not always

- It could be very similar (or even identical) to a verse, or instead introduce new chords and change rhythm instead

- Occasionally it can be instrumental 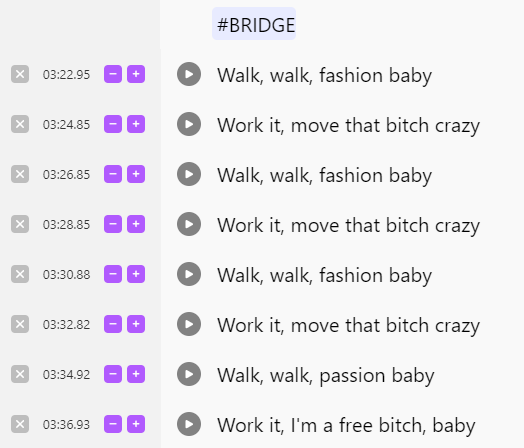 #OUTRO
- Takes a song to its conclusion with a flourish
‍
- Comes after or repeats the last chorus
‍
- Unlike other sections such as the #VERSE and #CHORUS, the #OUTRO is not a repeating section. Therefore, the #OUTRO tag should be used only once per song. 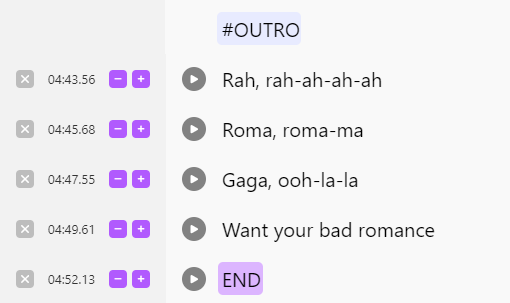 Dos and Don’ts
Do start every song with a Tag

Do maintain consistency: please make sure to use CAPITAL LETTERS for the tags

Do leave a space between the end line of a paragraph and the tag corresponding to the next one.

Do start every part with a tag, or it’ll be signed as #VERSE by default. It also counts for parts that are following an INSTRUMENTAL

Don’t confuse the already existing “Instrumental” and “End” with Tags

Don’t change the stanzas structure: there can be two verses before a chorus, tag them #VERSE and #VERSE avoiding numbers 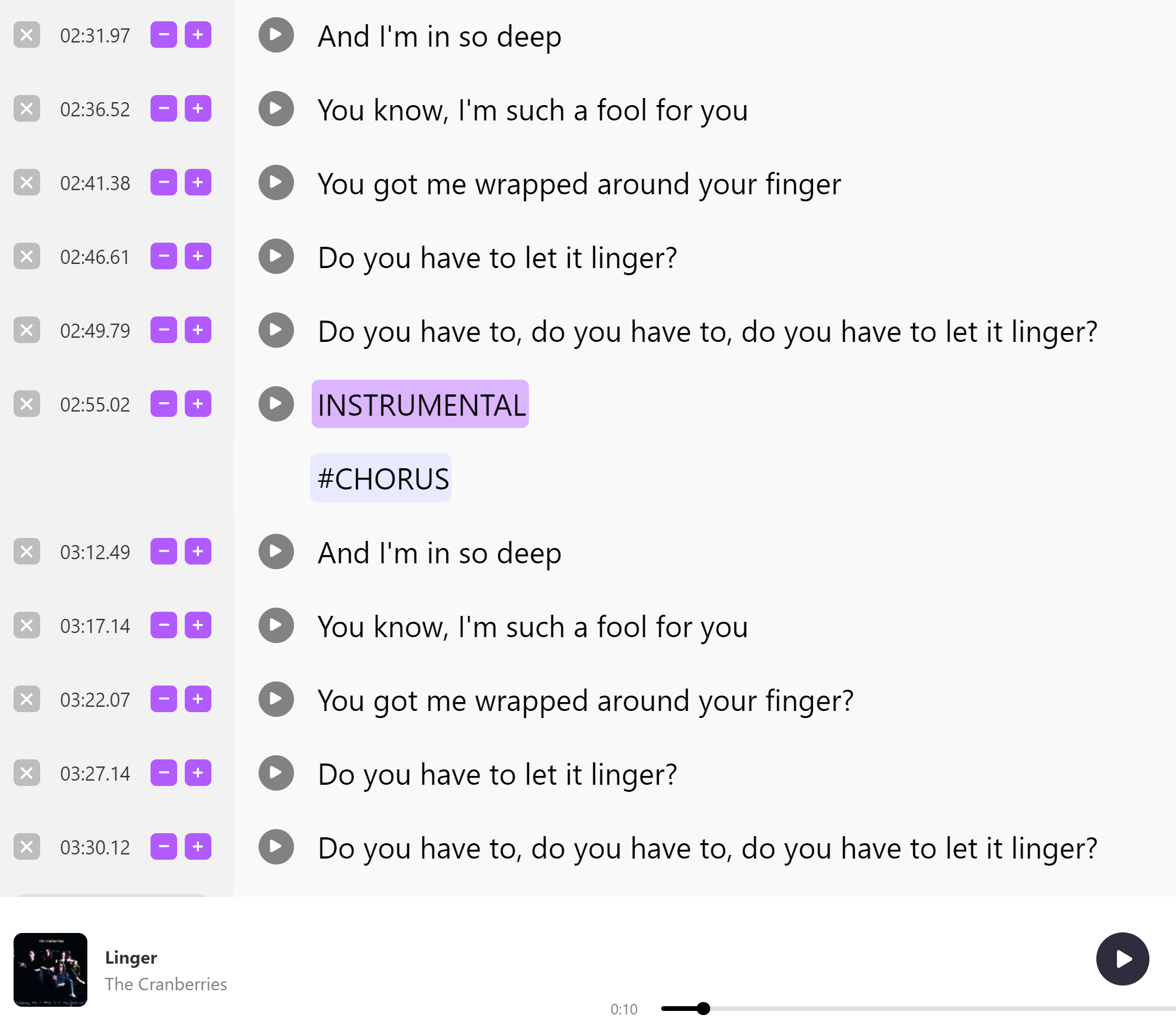